So the anti-GMO bill 2491 veto was overridden today and it is no surprise that those same A’oles are at it again and can’t control their mouths or their behavior.  It is amazing that there are adults out there like Helen Lovell who complain about no aloha and then publicly post this kind of stuff all over the social media.  What she hasn’t yet realized is that this is just day one and it’s not even enacted yet.  Thank goodness she didn’t tell anyone to drink poison or threaten crop destruction.

She’s a great example of the respect and aloha of the dialogue here in Hawaii.  Something that our Congressional Representative Tulsi Gabbard really should see and understand who she is supporting.  I had to send it to her on her Facebook page which she unblocked me from because I publicly called her out on it. 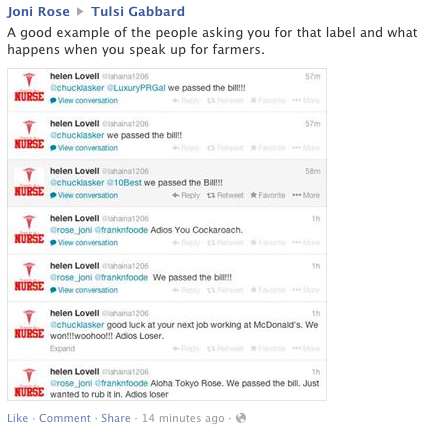 I’ve been called a shill, a troll, and given a nickname, Tokyo Rose, but never loser and cockroach before.  This does indeed illustrate a new higher level of aloha in the A’ole GMO Club of Kauai!

One thought on “The Norwegian Aloha of Helen Lovell”