In 2007, a study was conducted on the scientific literacy of the US public.  The results found that only 28% of people were considered scientifically literate.  It is no wonder that we are having controversy in our state on issues related to GMOs.  The minority of folks who understand and accept the evidence is the underwhelming minority and even less so when it comes time for speaking out.

If you just take a look at the many recent polls on GMOs in the local papers, you can clearly see that reflected in the results.  There are more people lacking the ability to decipher what is evidence and what isn’t.  Then that same population makes for hot pickings for a very powerful fear mongering campaign by industries trying to grow its market share.

The lack of scientific literacy and the advent of social media has paved the way for this movement supported by a largely uninformed public, who have been bombarded by black marketing tactics and the growing presence of environmental groups.  Extremist activism has now become a mainstream way of life for some here in the islands and it doesn’t look like it is going to stop, unless others are willing to speak up.  However, when activists resort to intimidation, the likelihood of people who disagree with them speaking up becomes even less.  Just watch what happens in this video during the hearing for Bill 2491 and note the emotional tone facing the council members who were hesitating:

Here’s a personal account posted on a Civil Beat article of someone who acknowledges the tactics being used that morning:

There is an even slimmer chance that the leaders in office are sufficiently scientifically literate enough to make sound decisions, knowing the above stated statistics.  It is no wonder we are seeing laws being passed in Hawaii against this technology.

Take a look at some examples of the intimidation that happens if you disagree with their position and make it known: 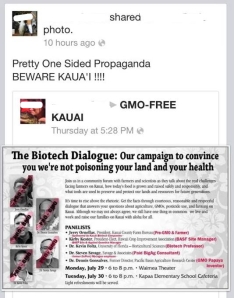 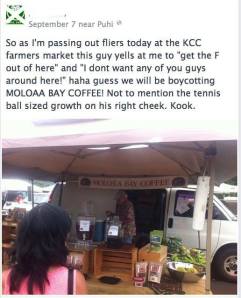 We also can’t forget Kevin Folta’s interaction with another Kauai activist, Christi Demuth.  Or even the death threats that followed Kevin and Karl after their trip to Kauai.

Now, if you haven’t learned yet, you do not want to disagree with these people because their power is in their loud voices and social media masses.  So if you are a leader in the community, you’d better watch yourself if you are perceived as not supporting their position because you will be subjected to all kinds of nasty and intimidating tactics.  In addition, they will quickly complain about no aloha from the other side, but then look what they have done to Chuck Lasker, who has spoken out about issues concerning biotech:

(Note, if you want to help stop this, please scroll down to the bottom and flag it.)

They are even paying people to sign this petition! 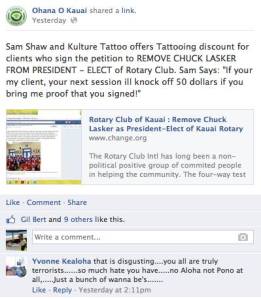 Take a look at the commentary of these people.  Note how they claim to be victims but then post vile comments like those above, being the same hateful people signing this petition, and who posted a litany of hate on the Pro GMO FB page when it first came out!

These folks are the same extremists that leaders are working with and listening to in order to make laws.  It’s no wonder why the community remains divided.  In normal political dealings, radicals that can’t be reasoned are marginalized and the reasonable folks are the ones you mostly work with.  That is the leader’s choice to either continue the division by working with loud-voiced radicals or choosing to support what is best for the people as whole and work with more reasonable and cooperative folks.  Unfortunately, with tactics such as those witnessed, what leader wants to be subjected to this?  You’d Better Vote That Way Or Else I Go See You Later In Da Back Alley!