The Babes Against Biotech have made an amazing groundbreaking discovery on the island of Oahu!  Read what they have to say about this discovery below in one of their posts with a video of this event on Facebook: 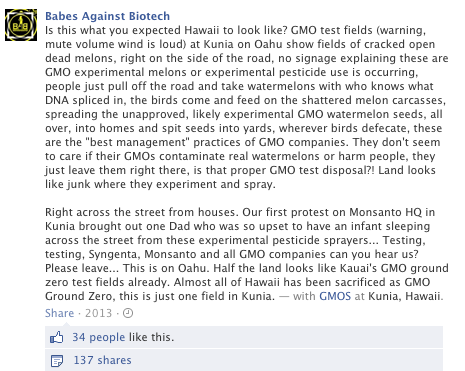 Note that there are 34 people who “like” this and another 137 who shared this post too! How many people are we spreading rumors to before actually doing some research first? This post is meant to just be inflammatory towards biotech as it contains all the typical propaganda of the A’oles.  For lazy Hawaii people who don’t bother to research what is being said, it will ring true to them for now, only to be debunked later.

If they actually did a bit more detective work before posting this, they would realize that there is no such thing as a GMO melon or any such tests being conducted here in Hawaii. The more likely possibility is that this indeed is Monsanto’s fields that are subleased to another company who also subleases it to a melon farmer.  And that melon farmer is probably Sugarland Farms, who grows his melons out in Kunia!

Like someone once told us, that is why these women are not called the Intelligent Women Against Biotech.