Let’s face it that the mainland activism groups have decided to take root here in our islands.  We already know from an investigative report late last year that the majority of the funding is indeed from mainland sources.

Many mainland donors are getting tax deductions giving monies to fund supposedly non-profit groups like Hawaii SEED in doing lobbying efforts under the guise of being an “educational” entity.  It’s no wonder why other groups, like the Center for Food Safety and Earthjustice, have latched on also.

When you look further into the this supposed grassroots movement, it is clearly not based here in Hawaii.  It looks like Southern California has come to turn Hawaii into their tropical paradise.  It also includes followers that believe in UFOs, ascension, conspiracy, and spirituality.  That sounds like a lot of Southern Cali woo indeed. 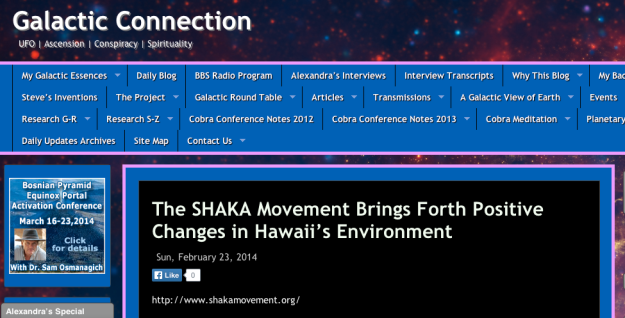 These people not only believe in woo but have decided to bring it to Maui under the guise of a Hawaiian sounding name, SHAKA.  When you look up the website (www.shakamovement.org) on WHOIS, you’ll find that it was started on 10/29/2013.  Pretty recently formed just a few months ago.

Royal Alliance LLC appears to be an investment company that purchased land for a “natural healing center.”

As much as this SHAKA movement sounds local, it is far from it and being funded from California.

The Maui A’oles are trying to also trying to get this on the ballot with this mainland petition.  One of them, Karen Chun, tried to use Whole Foods to get folks to sign and it looks like, gasp, they refused to allow the petition to be there!

So as much as you might think that this SHAKA thing is a locally initiated thing, you’re wrong.  It indeed is California style coming to Hawaii with UFOs, ascension, conspiracies, and spirituality.  The woo factor is floating around indeed.

5 thoughts on “The SHAKA Movement: More Mainland Money to Maui”